Do you feel the blood sucking from our pulmonary veins to oxygenate the zombies who run America?  Metaphoric Multiple Sclerosis befalls the average citizen while the fat pretenders graze on the constituents. They make lofty statements about “pro life” tossing away the slightest real significance of the two words.

Pro as adjective: supporting; for; with; favoring

How can anyone who is mentally capable of thought and proclaiming Christ as their savior equate “pro life” with only the concern of the birth of a baby?  Shall we have an orientation for our poliTicks to bring them back to grade school to learn about mammals? Here’s a WIKI on the word for the morons who vote against life while claiming “pro life” lies.

Here’s the truth in their deception:  “Pro Life” is short for PROLIFERATION of gobs of cash placed into their personal treasury for further enrichment in their lifelong election cycle that keeps the plutocrats pleased.

Ticks are small arachnids in the order Parasitiformes. Along with mites, they constitute the subclass Acari. Ticks are ectoparasites, living by hematophagy on the blood of mammals, birds, and sometimes reptiles and amphibians. (Thank you Wikipedia, again.)

PoliTicks have sold America out from under us and are keeping the mentally-ill fully stocked with guns and ammunition to reinforce their vile, heinous crimes. PoliTicks are terrorists. From the Center for Disease Control (CDC) here are instructions to remove a tick.

I am reminded of the song titled “Late Lament” – The Moody Blues from their album “Days of Future Passed” (1967).  “Breathe deep the gathering gloom…” 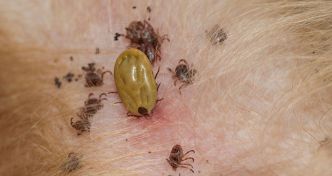 (Thanks to the plethora of awesome learning tools one finds on the web: Wikipedia and Dictionary. Subscribe and/or donate if you can.)