The most brilliant, insidious plan ever – pure evil… 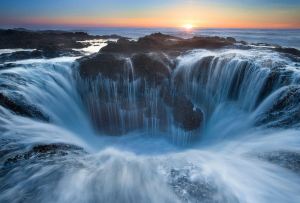 This is America: drowning her citizens and caving in on herself.

Though it’s truly one of the wonders of the world found in Cape Perpetua, Oregon, Thor’s Well  (AKA: Spouting Horn), is considered a “gateway to the underworld”. This natural beauty is used here in a metaphoric sense. It is the view of the hole drowning an entire nation of people, if not the whole planet.

Let’s play a game.  Suppose that you wanted to create the most brilliant plot to manipulate all of the money, land, and power the world has ever known. Ian Fleming created some great antagonists in his James Bond series, and the Marvel Comics Superheroes fought formidable foes, right?  So, how would you begin?

First, you would need to infiltrate every power center in the United States. Your plan may consist of permeating many local and state governments into which you could squeeze your army of pawns. It should include taking however many decades necessary to control major federal, state, and local education and financial appointments via the three branches of the US government:  Executive, Legislative, and Judicial. Over time, you would slowly gain control of these to overturn every major progressive decision. Most importantly, you would realize the need to have control of the minds of at least 50% of the population by owning the major media outlets from which they gather their news.

So, here we are. The top billionaires (Gates, Kochs, Waltons, Ellison, Bloomberg, Zuckerberg, et al.) command the wealth of the United States and beyond. Each has their hand in different pies to control the rest of us.  In addition, the Kochs have paid careful attention to building power via their personally elected officials who are hell bent to undermine every policy that has passed to help the average American. Nothing short of absolute indentured servitude of the entire population satisfies these two.  Thus, we have a Supreme Court that has allotted personhood to a corporation. We have a President, who has appointed a Secretary of Education with a desire to privatize education and eventually deny free public education for the poor and underserved. And we have a mainstream media with conservative and corporate bias twisting the minds of the uneducated citizenry (see the previous point).

How else would two brothers, both ex-Vietnam Veterans living 100% off of the government via their VA, Social Security, and Medicare benefits who live together to combine their meager existence in order to make ends meet, both vote Tea Party Republican?  Their daily diet consists of  mind-numbing, Bill O’Reilly alphabet hate soup and Rush Limbaugh spew stew.  When they are reminded that the Tea Party candidates wish to decimate social security and medicare benefits, they go into the “Limbaugh Loop”: “The government is too big. Too many people live off of the government.”

Hello?  It’s a masterfully insidious plan, is it not? When you can control the population to the point where they will elect to starve themselves, you have won!

insidious – : causing harm in a way that is gradual or not easily noticed / awaiting a chance to entrap / harmful, but enticing / having a gradual and cumulative effect / developing so gradually as to be well established before becoming apparent

3 Responses to The most brilliant, insidious plan ever – pure evil…