AWe have visual confirmation that Trump remains completely friendly to the Kremlin and Putin by this photo (among others) taken by the Russian Press (since the American Press was not allowed into the Oval Office during their meetings). 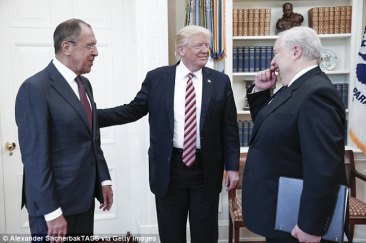 We know that Putin backs the heinous Assad regime in Syria.

From 2015, we learn that Assad won’t fight ISIS because he profits from it.

From April 15, 2017, Syria’s Assad is ‘Inextricably Connected’ to Islamic State.

Cut the rhetoric. Cut the bullshit. Cut the pretend games of sending 54 Tomahawk missiles to destroy NOTHING in Syria, not even the Syrian Air Force runway those 54 missiles should have damaged irreparably. Stop making vacant outbursts about your plan to defeat ISIS while you do nothing about it.  STOP PRETENDING to be against ISIS while maintaining your support for Putin and his regime who supports Assad who supports ISIS. Why do Assad, Putin, and therefore you, DJT, actually support ISIS? Because you’re all profiting from both the terror and the terrorism while keeping ISIS fed and armed.

And now this from NY Times: Meet the Connection Between Jared Kushner and Putin

REMOVE TRUMP AND HIS ENTIRE CRONY CABINET FROM OFFICE IMMEDIATELY!