She Lived A Life of Two

Herina lived like none other, running to and from her scheduled tasks as a high-wire balancing act. Always quick on the pick up, researched and ready to answer to anything and anyone, she discovered that opportunities in life sometimes pop up in mysterious ways.

She worked at three jobs, one of her own devising. On one particularly fine day, a meeting was called for her to perform her tightrope operation to an agent of a very famous person seeking out stories for his client. Pulling together all of her might and will to succeed at her third job that she desperately wished would someday replace her first two, she walked into the fancy downtown restaurant in her best warm-weather clothing.  For all of her devil-may-care attitude at the power of the wealthy, it was a good thing that no one witnessed the shriek she emitted into her closet upon the realization that she was peering into a wormhole.  She parted the various cloth structures hanging before her, willing them into submission. There must somehow be some magic spell that would allow her to suck up the “uh-oh, nothing fits” body into one of these strict seams.

The lunch began simple and breezy. She could shoot the moon with the best of them. It wasn’t until after a few moments of the delivery of the Mission Figs and Organic Mixed Greens appetizer that the cajolery took a different turn. Faces across from her looked less warm and fuzzy and started to glance away quickly while she continued her pitch. She wondered what was going so wrong, so strong she believed in her ability to win this.

The waiter shook up the moment with the delivery of their 4 main courses. He placed the Northern Halibut before her which she had not ordered. She didn’t want to make a fuss, and thus ruin the run of the pitched idea, so she let it sit as she continued.  Then, somewhere from the back of her mind, a thought slipped in from a Facebook post a friend had made recently that included a picture of two worms found in the halibut steaks that she and her husband were preparing. Herina had read every “eww, gross” comment and even a link from a blog written by a fisherman and they were all flooding in now one after the other in an attempt to trip her lips. She tried to keep her mind split in two:  one on the story arc that she attempted to sell and one on the halibut worm memory.  She sipped the water and coughed a little from a trickle that headed down her windpipe.  Seeing this as a universal clue to excuse herself to the bathroom, she created the space for a quick moment to regain her composure.

Out flew the worms and the thoughts of gross parasites as she sat in on the porcelain seat and gave herself one of her “if Mom were alive” pep talks.  She felt better.  Straightening up, she headed for the wash basin, looked into the mirror and smiled. There before her as she watched her lips separate across her teeth in a wide beam, she found an errant piece of arugula stuck firmly over the entire front right tooth. She looked like Lucy performing her black teeth schtick.

Laughing aloud, she rubbed two clean wet fingers across the suspect, wiping it down from tongue to gullet. A fancy-do-type-A elder watched in the mirror while pretending to fix herself.  Herina winked at her, dried off, and walked out resuming her place in society…

Don’t order a salad at an important meeting… 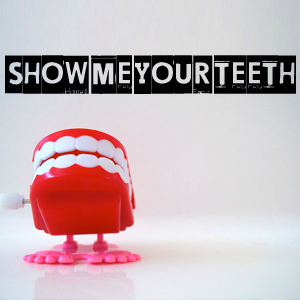