Follow me down the path of the pretty boxes all lined up for your viewing and listening pleasure. I’ve been blogging about the boxes we live in and work in (especially my own), and now I’m looking up many more box top treats.

Music Boxes!  Did you ever have one of those? I’ve lived in one or another most of my life, and they are marvelous creations! They come in all shapes and sizes and are usually of the wind-up variety or spring-loaded to the opening of a door. So delicate and sweet the little plinkety-plink sound of the music that entices your aural senses. I received one once when I was a wee lass and played it endlessly throughout my formative years whenever I needed a little lift. My Mom gave me another one when I was 14 or so. It was not a box, but rather a mini stage upon which sat a grand piano made of glass that played “You Light Up My Life” when the turnkey wound up. My Mom told me that it had belonged to my Great Grandmother, but I couldn’t believe it though I played along. ‘-)  Debbie Boone had brought the Joseph Brooks penned tune to the masses in 1977 and I wanted to debate Mom about the fact that G-Grandma had passed way before my birth, but she liked to believe her stories, so I let this one go.

I’ve sung in music boxes too: the small acoustically-treated boxes in studios (called an “iso-booth”) as well as the live and reverberant ones filled with people and booze called nightclubs. These are two very different music boxes.  You pay for one type that puts you under a microscope in a holy torture of sorts as you attempt to sing or play the notes of the song perfectly.  The other pays you to entertain humans, and no one cares if you make a mistake here and there. In fact, sometimes that’s called brilliance.

If you’re an audio person who likes to record yourself, then you’re well aware of the times you have purchased audio programs for recording and editing. Though the software arrives on a disc that could easily be mailed in an envelope, often, it arrives in a box that has no other reason than to look big.  The box literally holds a thin, plastic optical disc and some paperwork about copyright infringement and other legalese. This is one reason that I’m glad to have a cloud to download from, but some programs are just so biggie big. Microphones and other audio gear purchased by musicians usually arrive in boxes too. A speaker is a boxed enclosure that contains one or more drivers and a crossover, and if it is active, it contains an active crossover along with amplifiers that provide power to the drivers (aka speakers).

“Bud, take the wheel.  I feel a song coming on,” claimed Malvina Reynolds as she penned “Little Boxes“, (copyright 1962 – the year of my first breath of life). If you can make it past the 6-second commercial, this lil YouTube video shows you how a music box works. 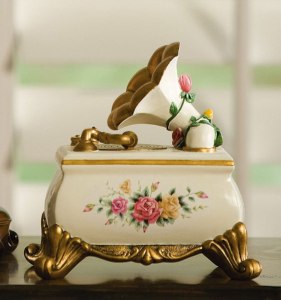 I have been teaching in the Broadcast Electronic Media Art department at City College of San Francisco since 2001. I started teaching full-time in 2009 and am tenured. My career as an audio engineer spans 32-years since the first day I began to record and mix songs on my Tascam PortaStudio (cassette 4-track) in the early 80's while attending college at UC Berkeley. I formed a couple of bands and sang lead (sometimes playing rhythm guitar) until 1988 when I discovered that the "behind-the-scenes" tech realm was much more to my liking. I love how an audio engineer controls the ENTIRE sound mix, and not just one's own instrument. I then began a career as a live sound engineer in earnest and have toured extensively throughout the U.S. and Europe as front-of-house sound engineer for a multitude of bands on various record labels (most notably "Medicine" on American Recordings) and have been a staff engineer at the venerable Bottom of the Hill nightclub since their inception in 1991 leaving a regular shift there in 2010 due to the teaching schedule. The club and its staff are like family. I owned and operated a live sound production company since 1989 (ending officially in 2017) called dcj Productions that has provided sound to the Bay Area community (mostly in the non-profit sector) in both large outdoor sound events as well as nightclubs and music halls. In 1991, I started recording bands on an 8-track Tascam TSR-8 analog tape recorder and moved into the digital realm in 1993 to 16-tracks of Alesis ADAT connected to a Soundcraft Ghost console in my home studio. In 1995, I advanced to Pro Tools and have been recording exclusively digital ever since, combining audio skills in sound for film as a location recordist as well as an engineer in post-production sound design and mixing. I remained "strictly analog" in my live sound mixing until just this past year (2012). Now that one can obtain a decent, live sound digital mixer at an affordable price, it was high time to check out digital for live. I now have a Presonus StudioLive 16.4.2 to work on with my students to give them much needed hands-on experience with a digital console. I co-owned and ran APG Records & APG Studios, an SF record label and recording studio, from 1999 - 2004 which had a distribution deal through EMI. The company folded in 2004. I continue to record music and engineer live performances at many Bay Area venues in addition to full-time teaching at CCSF. In 2001, I was hired to the part-time faculty at City College of San Francisco in the Broadcast Electronics Media Arts department where I have taught many of the classes including Digital Media Skills (BCST119), Basic Audio Production (BCST120), Digital Audio Production (BCST124), Sound Recording Studio (BCST125), Sound For Visual Media (BCST126), Advanced Sound Recording (BCST127), Sound Reinforcement (BCST128), Audio for the Web (BCST135), Video for the Web (BCST136), and Field Video Production (BCST141). I have also taught classes in sound design, audio for animation and games, music video, and computer applications at Art Institute of California-San Francisco, Globe Recording Institute, and Laney College in Oakland, CA. Outside Affiliations: - Co-Director of SoundGirls - current member of Audio Engineering Society and on the SF Chapter Planning Committee - past Vice President and Interim President Board of Directors - Bay Area Girls Rock Camp - past volunteer/contributor to Women's Audio Mission - past member Bay Area Women in Media and Film - past Board of Directors for Camp Reel Stories
View all posts by danaj33 →
This entry was posted in Uncategorized and tagged audio programs, band, editing, iso-booth, Malvina Reynolds, music, music box, nightclub, optical disc, Pete Seeger, sing. Bookmark the permalink.